Willow is now for sale... Click on the above page menu... select the 'Nb Willow for sale' page.

at April 06, 2021 No comments:
Email ThisBlogThis!Share to TwitterShare to FacebookShare to Pinterest

Introduction - Blog created from a Website Changes we've made from Website to Blog, with Page Menu on the right Column...
Maps and Apps (18/8/20) Handy ways to keep track of position and records of Fav Wild Camping spots (This is not a Satnav advert)
Temp Suspension Motorhome use in Scotland (Covid Pandemic) 17/8/20 Comment on horrific mess caused by 'wild campers' during Covid pandemic...
Plus access particular Pages from the above Pages Menu.
at September 15, 2020 No comments:
Email ThisBlogThis!Share to TwitterShare to FacebookShare to Pinterest 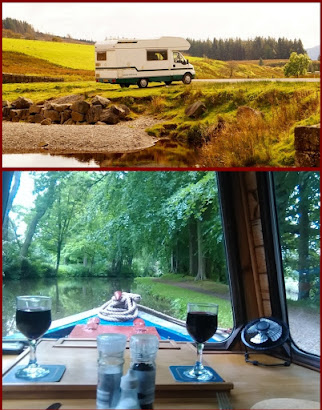 The photo-wild.co.uk site has been converted from a traditional website to a Blog. We are all about 'cruising' by road or canal - by either Motorhome or on our Narrowboat, Willow.... Photo recording much of what we see en-route or when 'moored'. More on this on our page 'About Photo-Wild'. Like a website, you can select a particular page of interest from the above 'Pages Menu', or just browse the blog postings.

One advantage of a blog format is that we can create dated posts direct from mobile phone or tablet, as we 'cruise'.

Please feel free to leave comments on any of the posts, or in the lower section on any of the pages. Such comments, once moderated (legal requirement), will be shown on the relevant page or post for all to see.

If you wish to send a private comment, or to contact us privately, please feel free to use the 'message form', also at the bottom of any of the pages.

at September 14, 2020 No comments:
Email ThisBlogThis!Share to TwitterShare to FacebookShare to Pinterest

Many wild motorhomers will already be aware of the 'park4night' App available on Android (not sure about IPhone). We've used it a number of times if we've been struggling to find a suitable locàtion during the days 'cruise'.

However our main source is from our own experience. To keep track, we have our tablet (most have GPS) mounted on a dashboard bracket and plugged in to a 12v supply. 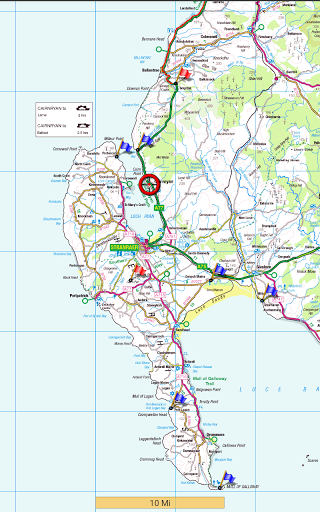 On the tablet we have the free Memory-Map App. It has the OS UK road atlas map included (most of time that's all you need, but we also bought the OS Landranger). Once logged on to the GPS signal, a red marker centred on the map indicates your position on the map. Nice feature as you drive, because the red ring position mark stays centred, with the map moving to keep indicating your location. But now, for us, the main point of Memory-Map for motorhomers. When you discover a useful overnight stop, or water point etc, you simply tap on an icon to produce a 'mark' on your map at the GPS point. See the graphic...the mark is indicated by a small blue flag (but you can change the symbol/colour etc to suit). That mark indicates your find on the map for future reference. You can apply text to the mark EG "Nice stop with forest walks, but no phone coverage". You can vary the symbol of each mark to indicate different features...a different symbol for water point from an overnight stop etc.

You might think that all this can be achieved with Google maps, but can you rely on an internet connection?

at August 18, 2020 No comments:
Email ThisBlogThis!Share to TwitterShare to FacebookShare to Pinterest

Temporary Suspension of our Motorhome Trips in Scotland

Due to current irresponsible and diabolical behaviour of many 'wild campers' using Scotlands rural parts, we have paused our normal use of our Motorhome in Scotland.

Seems the miscreants are 'staycationing' due to covid-19 travel/quarantine restrictions to Europe. We will wait until the guilty go back to holidaying in Minorca or wherever. They seem set to ruin responsible motorhoming in Scotland.  We would hate for folk to associate us and our responsible use of our Motorhome, with those that leave human excrement and other rubbish strewn around our Scots beauty spots.

Photos of the rubbish and excrement do suggest that it's mainly folk other than in motorhomes - the photos on social media of faeces with loo paper suggest folk pooing in the open, rather than the slurry-like effect of emptying an elsan toilet. Motorhomers don't have or use tents etc to discard.

There may, nevertheless, be some irresponsible motorhoming. As far as the influx of motorhomes on the NC500 is concerned, the creation of 'aires' would undoubtedly help both motorhomers and local communities. Seems that much of the increase of motorhomes has come from expansion of the motorhome hire fleet market - filling up existing caravan sites. Many such inexperienced users, perhaps as an overflow from full caravan sites, may be inexperienced in the ethical ways of wild motorhoming (some perhaps uncaring).

More caravan sites charging £30 per night is not the answer.  Such sites might suit those on a week's holiday - but for the many retired folk wanting to spend a couple of months in their self sufficient motorhomes (not needing electric hook-ups or shower blocks) upwards of £2000 is too rich for many -  us included.

So in the meantime you may see us moving en-route between Cairnryan and Willow's home mooring in Shropshire, but that will be it. Our 'motorhoming' will just be on Willow for the time being. Maybe come the red deer rut in October, we might see things a bit different.

at August 17, 2020 No comments:
Email ThisBlogThis!Share to TwitterShare to FacebookShare to Pinterest
Home
Subscribe to: Posts (Atom)